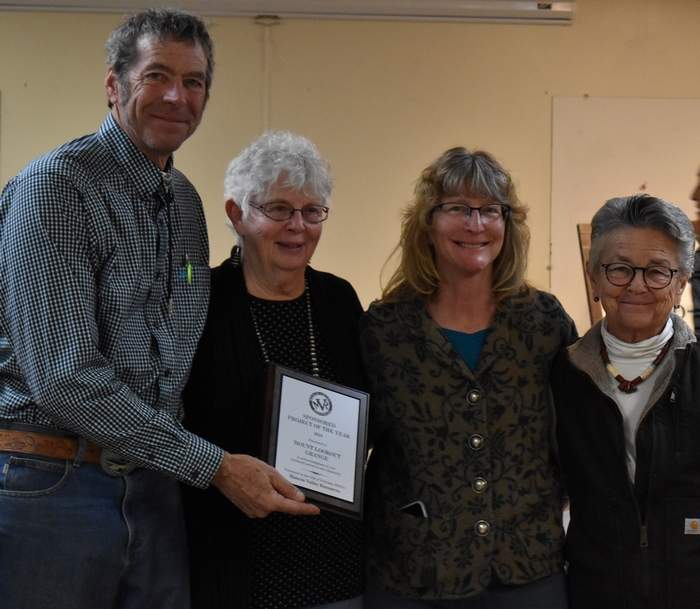 The Mount Lookout Grange has been named the 2018 Project of the Year by the Mancos Valley Resources Board and was honored at the group’s annual meeting this week.

Mancos Valley Resources, a nonprofit focused on “preserving and enhancing” cultural and community assets of the Mancos Valley, selected the Grange for its role as an affordable gathering place and for its historical heritage.

“The Grange provides a much-needed gathering place for the community,” said Josh Horner, board president for the Grange. “It’s a place to socialize, a place to meet new friends and see old ones. It draws a mix of people from the Valley, not just farmers.”

Representatives stood up to give brief overviews of their organizations’ work, before the board presented the Grange with a plaque recognizing it as the 2018 Project of the Year.

The Mount Lookout Grange, 680 Grand Ave., is part of the National Grange organization, an agricultural advocacy group over 150 years old.

The Mancos chapter was founded back in April 1917 by a group of 27 men and women and initially served as a space for square dances, talent shows and agricultural presentations, in addition to raising money for community members in need of support.

The Grange moved into its current spot – former home of the Zion Lutheran Church – in the 1940s, but four decades later, the organization shuttered its doors, to be replaced by the Mancos Head Start program.

In 2013, however, the Mancos Preschool was built, and the Head Start program moved out. And some local volunteers decided to revive the Grange.

“When the Grange board was first organized in 2013, it was composed of veteran members from many organizations in the community, Americorps volunteers and young people eager to know about an organization from the past of which they were not familiar,” said MVR board member Patricia Burk.

The Grange joined MVR as a sponsored project in spring 2016 and was placed on the town’s historic register in May 2018. It was twice awarded as a “First Place Recruiter” by the State Grange for maintaining and recruiting members, according to MVR board member Tim Hunter, who served as emcee for the night.

Now, a few years down the road, the Grange is a Mancos landmark, holding monthly gatherings and community dinners, a bimonthly acoustic jam, book clubs, a spring Maypole celebration and a fall pig roast. The Grange’s annual Martin Luther King Jr. Breakfast drew over 150 people this year, according to the MVR board.

The Grange also hosts local charitable organizations, including Mancos FoodShare, which operates its food pantry at the site, along with teaching seasonal cooking classes in the Grange’s commercial kitchen.

“We encourage everyone to come to a community dinner,” Horner said. “We love seeing new faces.”